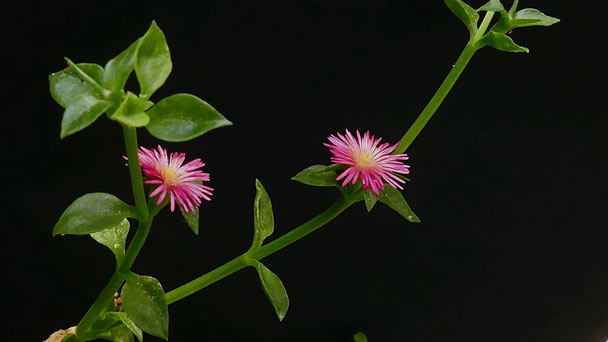 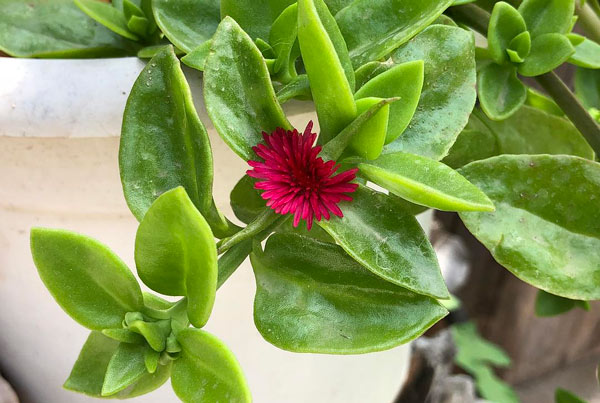 The genus Aptenia belongs to the Mesembryanthemaceae or vygie family. The family name is derived from the Greek word, mesembria, meaning midday, and anthemom, meaning flower, referring to the flowers that open in the afternoon (noon).
The genus name, Aptenia N.E.Brown, is derived from the Greek word, apten, meaning wingless, and refers to the wingless seed. The species name, cordifolia is derived from the in Latin words, cordi, meaning heart, and folium, meaning leaf.
This genus is endemic to South Africa and consists of four species, Aptenia geniculiflora, A. haeckeliana and A. lancifolia. They all occur in the summer rainfall regions of South Africa.
Aptenia geniculiflorais is an erect deciduous perennial with 4-angled branches. Aptenia cordifolia bears white to pale yellow flowers and occurs on dry flats in scrambling bush found in Namibia to Eastern Cape. 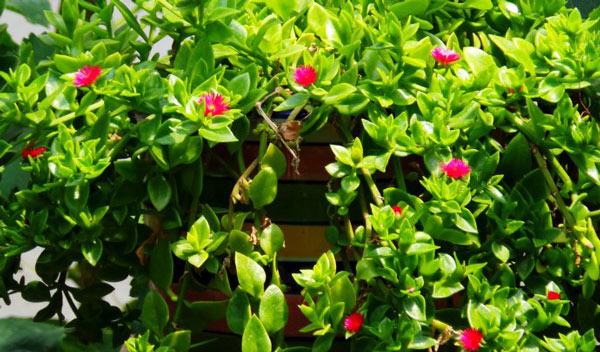 Aptenia cordifolia is a plant succulent of family Aizoaceae, the same as living stones and cat's claw. Aptenia cordifolia has a growth mainly creeping, although if it is in the shade it tries to grow upwards, so Aptenia cordifolia can climb a little (at most up to about 2m high, generally not more than 1m) and cover low plants. If you give it enough water, Aptenia cordifolia is a plant of very fast growth. The Aptenia cordifolia stems are green, thin and quite weak, although with time they thicken, lose their greenness and become relatively stiff. The leaves are oval or slightly heart-shaped, attached to the stem by a short petiole. Its common names, dew and frost, are given because in the leaves it has structures called papillae, which are accumulations of water under the epidermis that appear to be dewdrops.
The flowers are small, bright pink, with numerous very fine petals and orange stamens. Blooms mainly during spring, which is when the flowers are most abundant, but it produces some loose flowers throughout the year in climates without frost. After flowering, it produces small greenish fruits that go unnoticed and once ripe, they will dry and release small black seeds that do not usually germinate. It can also be said that Aptenia cordifolia is a plant edible, but it is only consumed in some parts of Brazil.

Es indigenous to southern and eastern South Africa, although it is naturalized in many parts of the world. There Aptenia cordifolia grows in shady and humid places, generally under trees. Curiously, while there is a small plant, in cultivation, by giving it a large amount of water and sun, Aptenia cordifolia becomes a huge and very invasive plant in a short time, capable of covering entire areas. 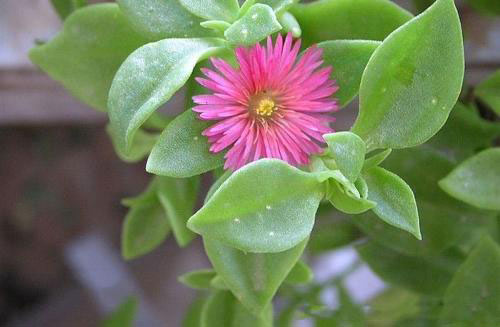 How to Grow and Care for Aptenia cordifolia (Baby sun rose) 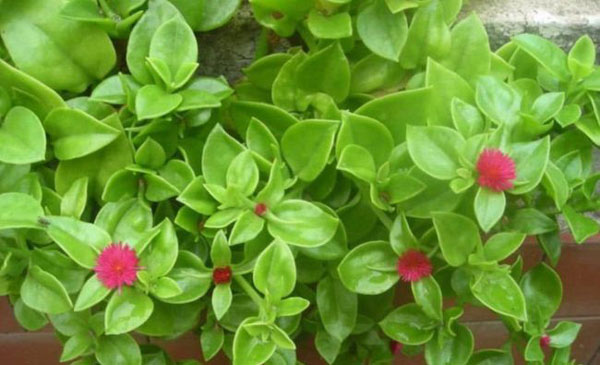 How to Care for Aptenia cordifolia (Baby sun rose) 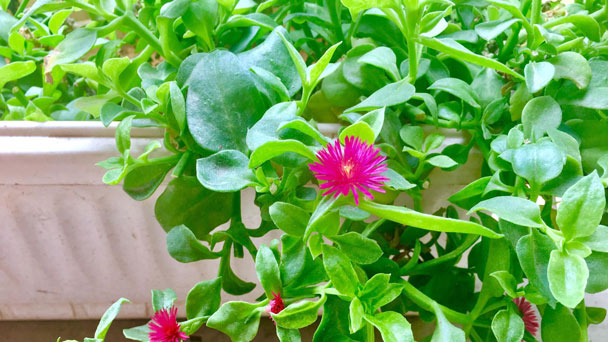 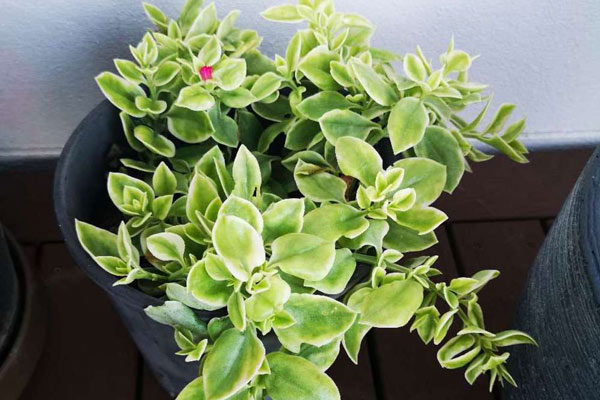 Pests
In general a Aptenia healthy will not have pests or if it does, the attack will not be important, but if it does attack something it will be the following:
Cochineal: Like almost all succulents, it is susceptible to mealybug attack, but generally it will only attack diseased Aptenia cordifolia plants or plants that are severely lacking in nutrients or water. It is very rare to find it in healthy aptenias. To eliminate them, you can use potassium soap or a specific insecticide.
Snails and slugs: Due to the creeping growth and the water that accumulates on the leaves, it is a perfect hiding place for these animals. They like to eat their leaves, which also helps them to hydrate, but they do not cause notable damage, mainly because of their growth speed. They will only give problems to Aptenia cordifolia plants that are too shaded and perhaps those that are in pots. To eliminate them there are poisoned baits, although you can also put a glass of beer in which they will fall and drown.
Diseases
It does not have diseases as such, but it does have deficiencies due to poor cultivation.
Chlorosis: Chlorosis is called the lack of chlorophyll, which can be caused by different crop failures: lack of some nutrient, generally nitrogen (they are solved by fertilizing or transplanting); lack of water being in the sun (can be solved by watering more); Substrate pH too high or low (solved by fertilizing or changing the pH) ... It is usually accompanied by a reduction in growth. Normally the chlorosis of this potted plant indicates a lack of water or the need to change the substrate or transplant, but by paying we can postpone that change a bit.
Decay: Caused by various fungi, it is generally due to excess water or lack of aeration, so it is not necessary to use fungicide but to change the growing conditions. If the entire base has rotted, the branches will have to be cut, removed the rottenness and replanted. Normally in this plant this will only happen in winter, but if we have it flooded it can happen at any time of the year. 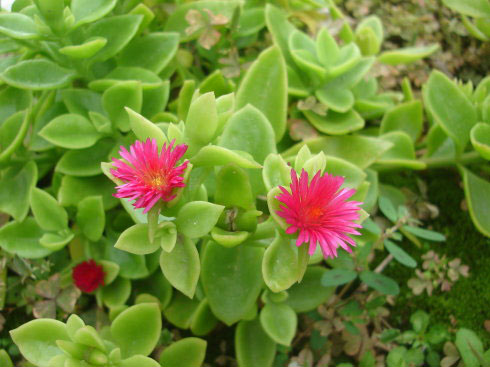 Aptenia cordifolia (Baby sun rose) can be very invasive, and when climbing it can cover other plants and kill them. Also, many branches try to climb and fall flat, which is not very aesthetic. This can be solved in several ways:
Pruning all the branches that go up to other plants.
Having it as a ground cover in an area where there are only large trees or bushes without low branches that it can climb.
Keeping it in a pot, where its growth is very reduced.
Watering it little and not fertilizing it, although this has the negative effect that its appearance will not be the best.
If we have it in a pot, something interesting that can be done is to put a plant with vertical growth that stays green in winter, and an Aptenia cordifolia. We place this pot on a pedestal and let the Aptenia grow as a hanging plant. A very beautiful effect is achieved, especially when it is filled with pink flowers. In tropical climates it will always be beautiful, but in frosty climates all the hanging branches will dry up during the winter.
In any case, it is advisable to have it in full sun and without small plants or rocks in between, so that it grows as flat as possible. In this way we avoid the branches that cross and bend and we achieve a much more orderly and beautiful appearance.